Going back to a regular ole novel is going to be strange after reading The Savage Detectives by Roberto Bolaño and If on a winter’s night a traveler by Italo Calvino in succession.

After discovering the joys of my college library’s stacks, which contain every novel *ever* (okay, slight exaggeration–let me rephrase: every novel I want to read), I took home a bunch of books to read over break. These were two of them. Neither disappointed. They were two of the most fantastic literary experiences I’ve ever had. And perhaps what I appreciated most about the “novels” were that they weren’t really novels: they surprised me. Both authors challenge, but most of all play, with the idea of the novel. And literature itself! Calvino more obviously, but Bolaño as well.

Seriously–if you want to think about narrative and novels in surprising, exciting ways, read these novels. 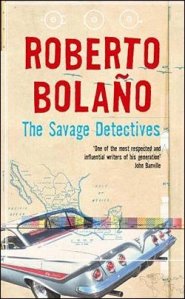 The novel is flanked on either end by Juan Garcìa-Madero’s journal entries. A 17-year-old law student and aspiring poet in Mexico City, Garcìa-Madero is swept up into the visceral realism clique by Belano and Lima. We meet the core gang of poets–the Font sisters, Enrique San Epifanio, Luscious Skin (worth reading just for his name), Rafael Barrios, among others–in this first section. Belano and Lima are an inseparable pair, but seem to enter and exit the story as mysteriously as they appeared in Garcìa-Madero’s life.

And now for the fun part. The second mammoth section consists entirely of monologues from characters dispersed over the years and in a wide array of settings, from Paris to Mexico to Israel. Bolano juggles over 40 NARRATORS (!!) in this section. They all refer to experiences they had with either Belano or Lima. Miraculously, I was not confused when switching between narrators. Bolaño lovingly gives each character his or her own voice, as though they were really speaking and he is just copying down what they are saying. As this section moves forward, we see parts of Belano and Lima’s futures mapped out: their loves, their travels, their mistakes. Always wanderers, the two separate and lead very different lives. We hear from our beloved friends from the first section, and some incredibly entertaining, others incredibly heartbreaking, narrators. Bolaño essentially is conducting a symphony of voices in this feat of a second section.

Through the cacophony, through the kaleidiscope perspective of Belano and Lima, the reader is actually unable to piece together a cohesive picture of visceral realism’s founders, though the two are arguably the novel’s protagonists. At the center of this symphony of voices swirling through space and time is a gaping hole: that of Belano and Lima. The reader never gets an objective portrait of them, but rather one colored by opinion, experience, and personality. And to me, that sounds more like life than like reading.

The Savage Detectives surprised me because searching for Belano and Lima felt like a true experience unlike one I’d ever encountered in a book. I didn’t have just one unreliable narrator, I had 40. And I didn’t want reliable. There is no such thing as a reliable narrator. And there is no possibility of ever fully knowing Belano and Lima, or knowing anyone! So what Bolaño gives us are not two characters, but two people.

We search for Belano and Lima just like we search for the characters of the people in our lives: by piecing together stories and experiences, we try to fill in the gaping holes of our perceptions of them. We may never know people, but we’ll be able to at least shape a perception. When I finished The Savage Detectives, I didn’t know Belano and Lima. But I certainly perceived them. In the respect that Bolaño allows the reader to fill in blank and construct their own Belano and Lima, they were the most real characters I’ve ever encountered. It didn’t feel like reading, but piecing together lives. More like living than reading, really.

So you can tell what I mean by deconstructing the novel!

Moving on to Calvino, If on a winter’s night a traveler is truly a deconstruction of the novel. And that’s what it’s intended to be. It seems as though Calvino laughs as he tears up the reader’s expectations of the novel. Meta-fiction at its finest.

The novel consists of the first chapter of 10 novels either destroyed or taken away from the Reader before they could be continued. Along with these novels that cut off at their climax are alternating chapters of the experiences of the Reader himself, who is a character. Or is he you? Narrated in second person, Calvino invites the reader to immerse him/herself into the story/ies. The Reader’s search for the missing chapters lead him into the arms of the Other Reader, Ludmilla. They go on this great adventure to try to piece together the novels, and really, it’s just a helluva fun book. It’s not an easy book, but it’s an amazing one.

As a college student I also appreciated Calvino poking fun at the university way of reading with a purpose. Kind of like ruining books because you’re reading it with a certain slant in mind, instead of letting the narrative speak for itself.

If on a winter’s night a traveler was designed for people who love to read and love to talk about reading. So for people like you and me!