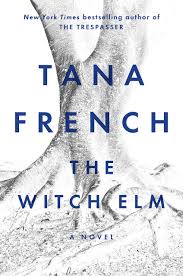 Title: The Witch Elm
Author: Tana French
Genre: Psychological crime
Describe it in a sentence: A young Irish man’s life is upended after he sustains a brain injury during a robbery, then is sent swirling further when a skull is dug up in his family’s Dublin estate.
TV/movie character who would like it: Stella Gibson in The Fall. She’d appreciate Toby’s journey because she probably knew he’d been deceiving himself all along. She’s smart like that.

The Witch Elm was 500-page dream I didn’t want to wake up from. So often first person is deployed to approximately 30% of its full potential (yes, this is a scientific blog). The Witch Elm, conversely, featured was masterful, deceptive first-person that wanted to make you feel really comfortable, only so French could spin you around and make you dizzy.

This first-person was like a couch. You sink into it. You take Toby’s perception of the world at face value, for a while. Then it turns out the couch has rotted at the bottom. It’s not even a couch at all, but a bunch of pillows balanced over a void. If you think about it too much or lean in too hard, then it’ll collapse and you’ll be floating in a universe askew.

In a phrase: I loved it. I love Tana French! And so does Stephen King, by the way — in case my word doesn’t quite convey the authority as King King’s does.

What did I like about The Witch Elm? So much. I liked that it was a crime novel concerned with pressing existential concerns — most fundamentally, who are we? Are we separated from our brains? If our minds are injured, is our “self,” or the self we know as our “self,” lost? How much of our selves are constructed by memories, selected carefully and constructed into fortresses of personality? If all of that psychic construction is shattered in a moment, what kind of Frankenstein self takes its place?

If this sounds lofty for a crime novel, that’s because it’s a dense, lofty book. Yet French manages to carry along the scenes with such pace and wit that it doesn’t feel dense, just exhilarating. There are some pages-long sequences in which Toby is poring over the past with his two cousins. All their dynamics are so raw, unspoken. There is underbrush to their conversation we’re only just beginning to sense. And yet the conversation itself travels quickly, hops along. She balances depth with sheer pleasure so well.

I don’t want to give any major plot points away. But the book is about a young Dubliner whose life changes when he’s gravely injured in a robbery. He moves out to the country to take care of his ailing uncle. While there, they make a discovery about hidden remains in the backyard. But that only happens at like, page 200! A lot of this book is about Toby and his crisis. Which to me was a very interesting crisis. I understand why someone looking for a standard crime novel might get tired of his circuitous thoughts and hospital descriptions.

However, if you’re looking for a genre-defying book that is as thought-provoking as it is engrossing, I recommend The Witch Elm wholeheartedly.